July, 2013 – I was part of a watercolor event at the Red Barn in Waitsfield.  It was a juried exhibit and, altho I was not among the winners of any ribbons, I was one of 37 artists / mostly from Vermont but a few from well out of state. The organizers, Green Mountain Watercolor Exhibits, is looking to have this an annual event.

A recent painting (Blue Birds) that was up at New Art Center in Newton, MA from Nov 2 – Dec 8. The juried exhibit was sponsored by the deCordova Sculpture Park and Museum Corporate Collection in Lincoln, MA. This was an exciting overlay of two of my favorite arts venues in the Boston area. The Museum Corporate Collection places artwork loaned to them by artists in private offices and their public spaces throughout the Greater Boston area, switching paintings out every year to keep them circulating and (one hopes) selling. They have showcased my work since 1994.

Since the gallery at 215 College Street (215 College Gallery) closed last May, I no longer have a venue in Burlington for a guaranteed annual exhibit space. A sample of my paintings can be seen at Big Picture Framing/ Blue Mall at 150 Dorset St, So. Burlington. I continue to be available at my studio in Vermont and on-line through this web site.

In the fall of 2005, I joined with other Vermont artists to create an artists’ group gallery in Burlington. The space was rough (an artist’s well used studio) and was in need of new walls, re-finished floors, and track lighting. I took this design project on and acted as general contractor for the developing group so that when we opened on April 7, 2006 we were very well received for both the art and the space itself. There were always 12 members and each of us had the gallery space for a month to do and show what we wanted / with responsibilities for advertising, mailings, gallery sitting, hanging and de-installation of work. There was tremendous freedom to experiment with our art and opportunities to share ideas with each other. After five successful years, we closed to pursue other avenues of work.

For the winning 2005 basketball team at UVM, their sportsmanship was seriously tested by participating in my Sport Painting event as part of Burlington City Arts spring auction. Dressed in white tyvek jump suits, they bounced paint-soaked balls onto a 4’ x 5’ canvas – with direction from their coach for the evening (me). There were encouraging shouts from the 200+ crowd that included their “real” coach, Tom Brennan, the evening’s auctioneer, Rich Tarrant as well as our city mayor, Peter Clavelle. This sport painting event was an early run-through of my own reality game (developed well before current reality shows) to encourage active participation between an audience and painters – working with direction on a single canvas. Auctioned off in a frenzy of competition, the resulting painting is now on view at the Shelburne Athletic Club, Shelburne, VT.

I have five nephews and one niece and between them, they had (in 2005) eight sons and one daughter. This project included these “babies” from 2.6 years to 14 years of age. I wanted to create an art piece in which they could all participate with me: this became my “babies” project. I sent each child a watercolor box, a good brush, 3 pieces of good watercolor paper and a fine-line black ink pen. I asked each child to draw (make marks) on the papers and also paint over the lines. They sent these to me – where I photocopied them and painted over their work (or added lines and color). I then photocopied the end results. Some had many iterations – others had very few. I put all the work into a bound book, with the pictures, names and birthdays of everyone. Since there were families from my side and my husband’s side, they were introduced to each other by this book. Now, they will also know me from the collaborative work done and published. To get good paint brushes into the hands of little people is not common. To have an art project outside of school, with a ‘real’ artist, and aunt is a treat on all sides. Each child has a copy of the final book. I have encouraged them to continue coloring in these. Henry Coen from St. Louis and I have done further collaborations. 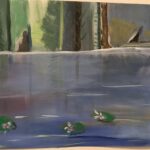 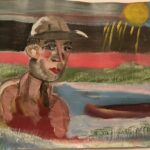 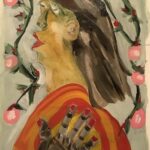 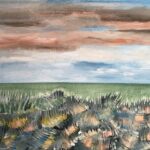 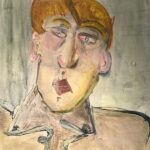 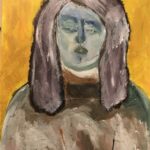 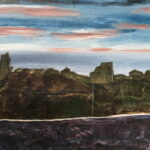 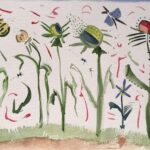